I had booked a ticket for Selcuk with Hannaro Travels in Istanbul, they offered me the best deal, 60TL for the ticket with the shuttle. Other agents seemed to charge even upto 80TL, so dont pay anything more than 60 for Selcuk. The shuttle picked me up at about 8, and the bus to selcuk started at about 9. Was quite impressed with the bus service, everyone was helpful and courteous. I cant imagine something like this in my own country, however what annoyed me was,like the lights did not turn off for quite sometime.

Day 5: Woke up in the morning to some gorgeous mountain scenery around Izmir. The Aegean Sea region Reached selcuk at around 7.30. Checked into Vardar Pension,which was just a couple of minutes away from the otogar.It was great to have a room of my own after staying in a dorm for 4 days. Had breakfast and left for Ephesus. I again took the walking route, but then I realized it was a bit too much. Finally I got to share a taxi with 4 other tourists at the turn for Ephesus. Paid 5 TL to go upto the higher gate. Although I reached at like 9.15, I was quite shocked to see such huge crowds, I had never seen so many people even in Istanbul. However, the views of the mountains on the sides were pretty good. Everything was quite uneventful till I saw the Library..and I had never imagined it would be so beautiful. Then I went up the Terrace houses, it was a great experience to see old(Ancient) mansions, wall paintings,mosaics, and it was so well preserved!! Coming out of the terraced houses, you get to see a good aerial view of Ephesus.

Then I walked till the place where all the burial tombs were kept, got to see a live wedding too!! (or maybe a mock one), then a show conducted with Greek warriors and kings and queens,all dressed up like the ancient greeks. I was glad I came to Ephesus. It had started becoming warm, so I decided to leave, got a dolmus back,for 2.5 TL. Lunch was at one of the local Pide saloons, next to the otogar, a huge mushroom pide for just 7TL.

In the evening I decided to explore Selcuk, it seemed like a well organised city. Walked up to St.Johns’s basilica,waited till sundown, I got the beautiful golden light + ruins I was looking for. The view over the Isa Bey mosque and the plains was breathtaking. Went down till the Isabey mosque, and came back meeting with several locals,who were very enthusiastic about getting photographed. Dinner was at Ejder restaurant, a huge mezze plate + lavash for 15 TL. So ended my first day in Ephesus.
Next would be Priene-Miletus-Didyma. 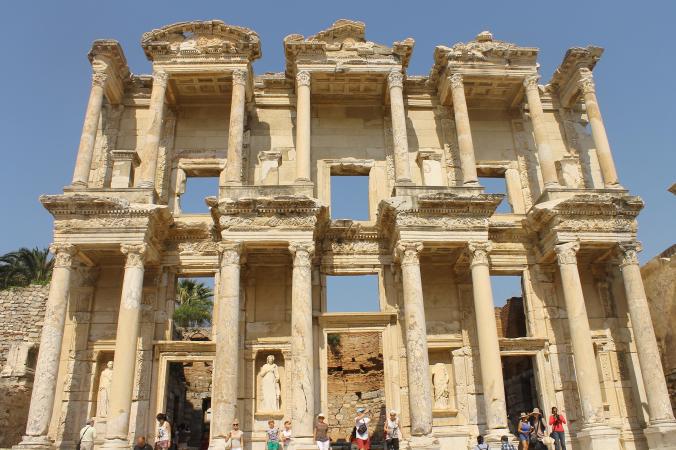 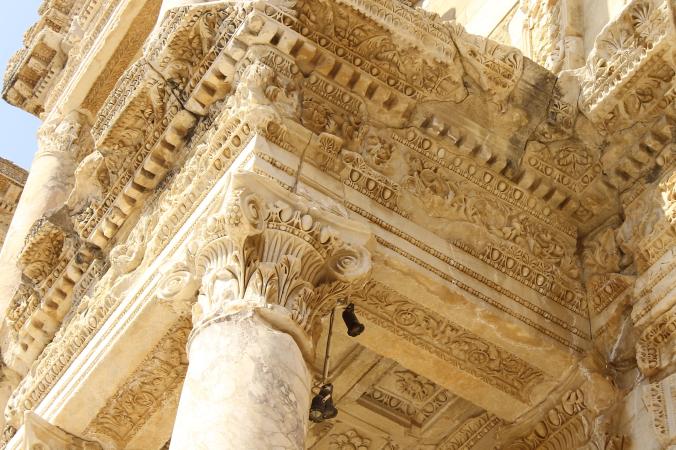 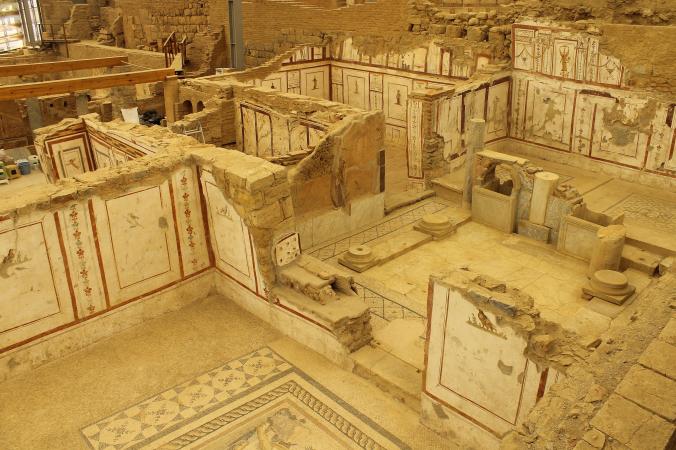 The wonderfully preserved villas at Ephesus. 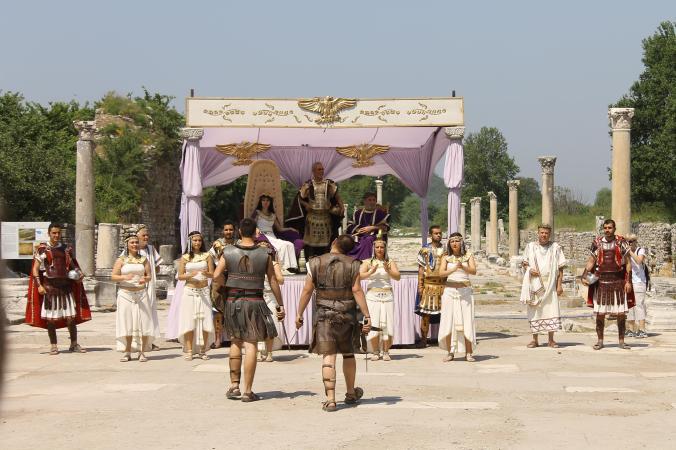 An enactment at Ephesus. 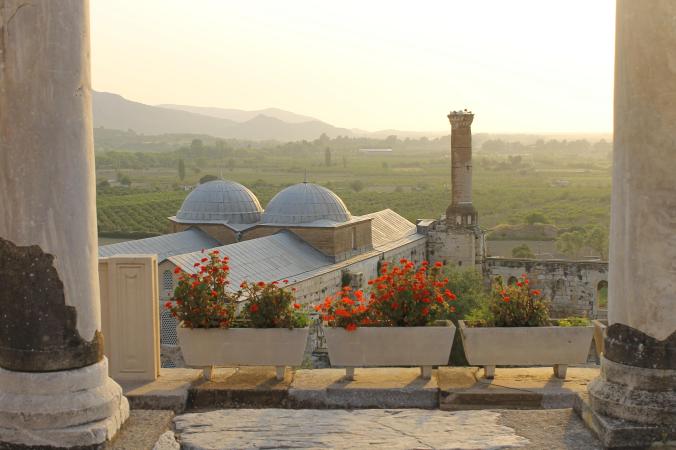 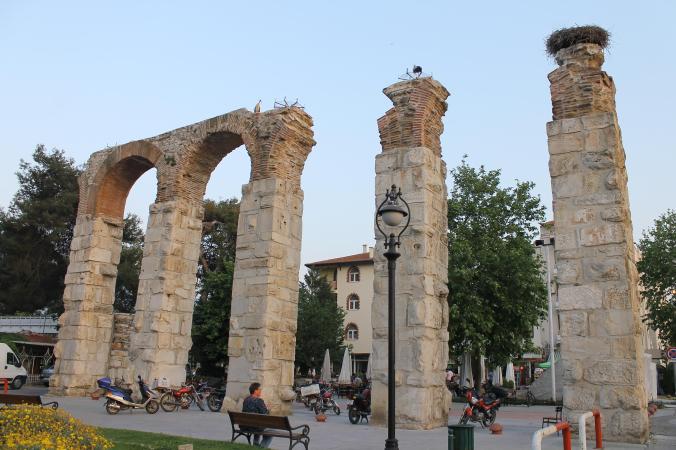 The Ayasoluk Fortress in Selcuk. 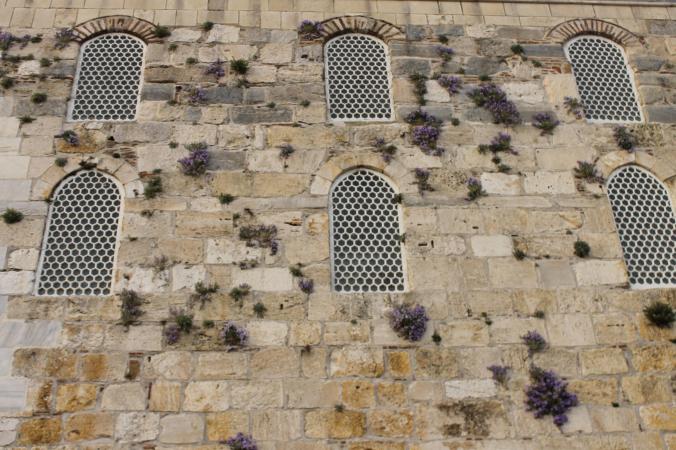 Walls of the Isa Bey Mosque. 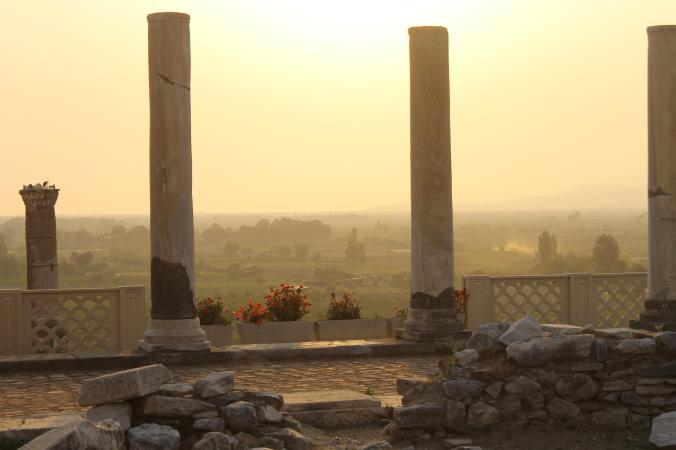 A brief summary of my Trip to Turkey.
Being Vegetarian in Turkey
4 Days in Istanbul.
Selcuk and Ephesus.
Priene-Miletus-Didyma
Afrodisias:The Best Graeco Roman Ruins
4 Days in Cappadocia.
Gaziantep
Nemrut
Sanliurfa

5 thoughts on “Selcuk and Ephesus”